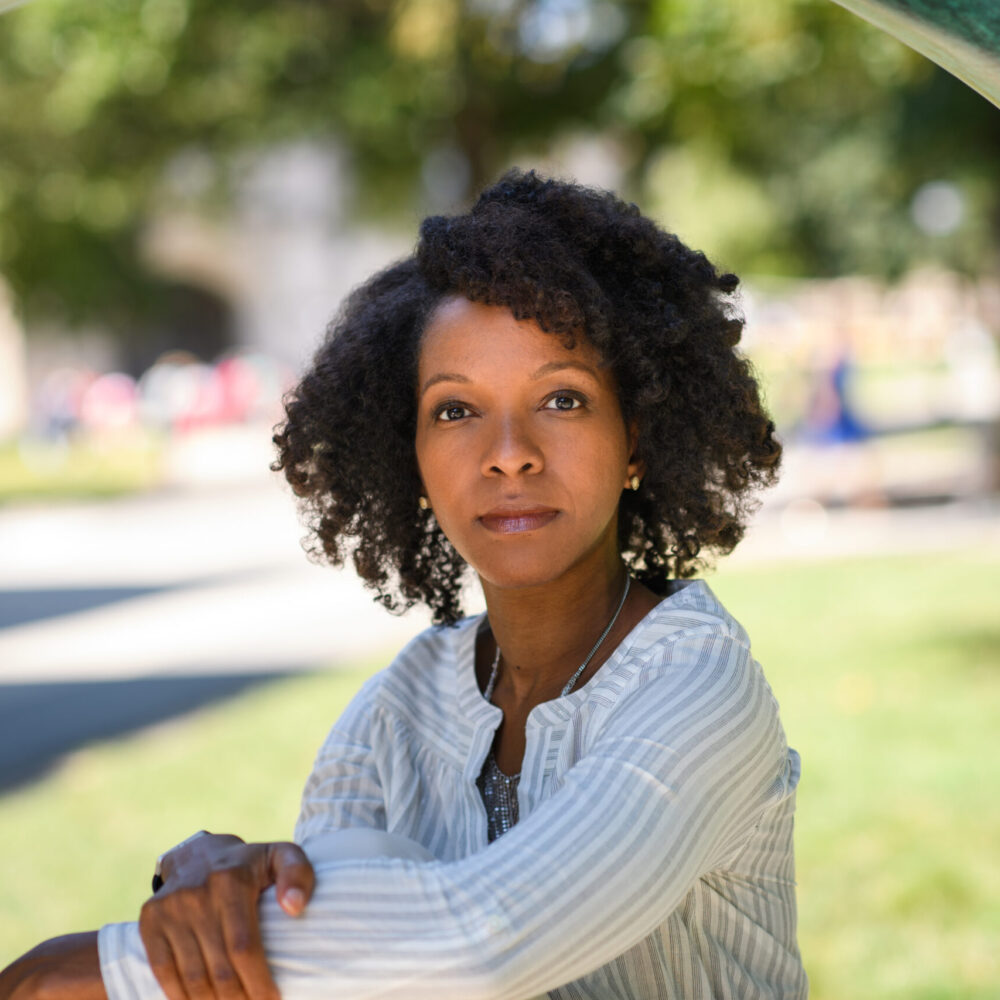 Born just nine years after the 16 Street Baptist Church bombing in Birmingham, Alabama, Imani Perry was instilled from an early age with a strong instinct for justice and progressive change. The rich interplay between history, race, law, and culture continues to inform her work as a critically-acclaimed author and the Hughes-Rogers Professor of African American Studies at Princeton University.

Perry’s work reflects the deeply complex history of Black thought, art, and imagination. It is also informed by her background as a legal historian and her understanding of the racial inequality embedded in American law. Her latest book, National Book Award-winner South to America: A Journey Below the Mason Dixon to Understand the Soul of a Nation, is a narrative journey through the American South, positioning it as the heart of the American experiment for better and worse. In looking at the South through a historic, personal, and anecdotal lens, Perry asserts that if we do indeed want to build a more humane future for the th 3/5 United States, we must center our concern below the Mason-Dixon Line. A “rich and imaginative tour of a crucial piece of America” (Publishers Weekly), South by America defies classification. In her New York Times book review, Tayari Jones writes, “Any attempt to classify this ambitious work, which straddles genre, kicks down the fourth wall, dances with poetry, engages with literary criticism and flits from journalism to memoir to academic writing —well, that’s a fool’s errand and only undermines this insightful, ambitious and moving project…. An essential meditation on the South, its relationship to American culture—even Americanness itself…. This work—and I use the term for both Perry’s labor and its fruit — is determined to provoke a return to the other legacy of the South, the ever-urgent struggle toward freedom.” South to America was named a best book of 2022 by the New Yorker, Time, Kirkus, and Oprah Daily.

Her book Breathe: A Letter to My Sons explores the terror, grace, and beauty of coming of age as a Black person in contemporary America and what it means to parent our children in a persistently unjust world. Conceived as a letter to her young sons, this “uplifting and often lyrical meditation on living” (Booklist, starred review) offers compassion, dignity, and resilience as a balm to all Black children facing a world rife with racial hatred. As The New York Times noted, “Breathe is a parent’s unflinching demand, born of inherited trauma and love, for her children’s right simply to be possible.” The book was a finalist for the 2020 Chautauqua Prize and a finalist for the NAACP Image Award for Excellence in Nonfiction.

Looking for Lorraine: The Radiant and Radical Life of Lorraine Hansberry is a revealing biography of one of the most gifted and charismatic—yet least understood—Black artists and intellectuals of the twentieth century. Although best-known for her seminal work A Raisin in the Sun, Lorraine Hansberry, who died at thirty-four, was by all accounts a force of nature with an unflinching commitment to social justice. Looking for Lorraine paints a “richly dimensional portrait” (Booklist, starred review) of the artist contending with exploitation, racism, patriarchy, and homophobia. As Library Journal noted in their starred review, “a must-read for fans of black and queer history, literary, biography, and women’s history.” A 2018 notable book by the New York Times, the book received the PEN/Jacqueline Bograd Weld Award for Biography; the Phi Beta Kappa Christian Gauss Award for Outstanding Work in Literary Scholarship; and the Lambda Literary Award for LGBTQ Nonfiction, among other honors.

In each of her previous works of scholarship, Perry endeavors to apply the lessons of modern history to our present struggle, whether to challenge or to celebrate. May We Forever Stand traces the history of the Black National Anthem; More Beautiful and More Terrible: The Embrace and Transcendence of Racial Inequality in the United States is an examination of contemporary practices of racial inequality that persist despite formal declarations of racial equality; Vexy Thing: On Gender and Liberation is a work of critical theory that traces the thread of modern patriarchy from the transatlantic slave trade and the age of conquest through the present day; Prophets of the Hood: Politics and Poetics in Hip Hop engages with the artistry, politics, and culture of hip hop.

Perry’s writing has appeared in The New York Times, The Atlantic, New York Magazine, and Harper’s, among other publications. Future planned projects include an examination of African American theories of law and justice, and a meditation on the color blue in Black life. She earned her Ph.D. in American Studies from Harvard University, a JD from Harvard Law School, an LLM from Georgetown University Law Center and a BA from Yale College in Literature and American Studies.

Perry is a member of Black Artists for Freedom. She lives outside Philadelphia with her two sons.

A professor of African American Studies at Princeton University and columnist for The Atlantic, Imani Perry won the 2022 National Book Award for Nonfiction for her book “South to America: A Journey Below the Mason-Dixon Line to Understand the Soul of a Nation.” 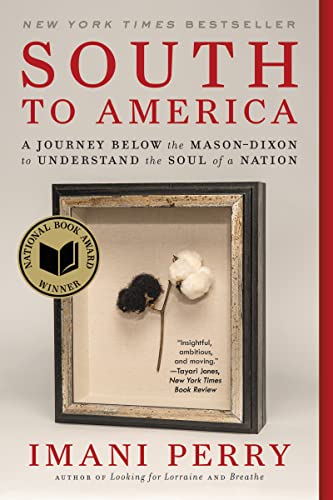 An essential, surprising journey through the history, rituals, and landscapes of the American South—and a revelatory argument for why you must understand the South in order to understand America.

We all think we know the South. Even those who have never lived there can rattle off a list of signifiers: the Civil War, Gone with the Wind, the Ku Klux Klan, plantations, football, Jim Crow, slavery. But the idiosyncrasies, dispositions, and habits of the region are stranger and more complex than much of the country tends to acknowledge. In South to America, Imani Perry shows that the meaning of American is inextricably linked with the South, and that our understanding of its history and culture is the key to understanding the nation as a whole.

This is the story of a Black woman and native Alabaman returning to the region she has always called home and considering it with fresh eyes. Her journey is full of detours, deep dives, and surprising encounters with places and people. She renders Southerners from all walks of life with sensitivity and honesty, sharing her thoughts about a troubling history and the ritual humiliations and joys that characterize so much of Southern life.

Weaving together stories of immigrant communities, contemporary artists, exploitative opportunists, enslaved peoples, unsung heroes, her own ancestors, and her lived experiences, Imani Perry crafts a tapestry unlike any other. With uncommon insight and breathtaking clarity, South to America offers an assertion that if we want to build a more humane future for the United States, we must center our concern below the Mason-Dixon Line. 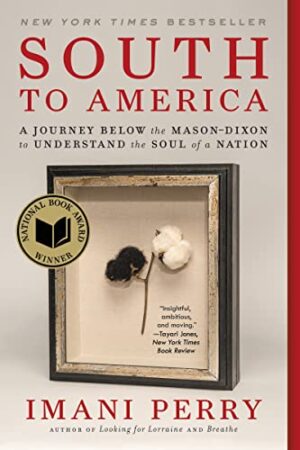